The first eggplant recipe I posted on this blog  was a Sichuanese dish. Now it’s time for another take on eggplant, this time from Burma. As you move southwestwards from Sichuan Provence, the mountains of the Tibetan Plateau of China eventually give way to the Shan hills of Burma, with the rugged landscape finally flattening into lush and steamy coastal plains. The differences in geography are reflected in the differing flavors between that first eggplant recipe and this one. 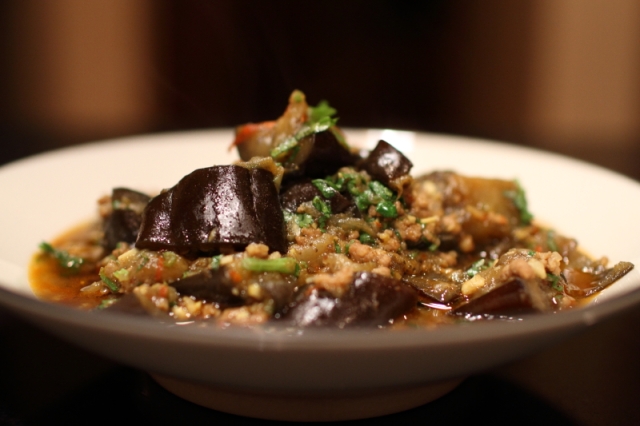 The Sichuanese eggplant recipe had a mild background spiciness coming from dòubànjiàng (豆瓣酱, or Chinese spicy bean paste). This dish, in contrast, brings the spiciness front and center with two different types of chiles. Also, given Burma’s proximity to the coast, it’s shrimp paste instead of soy sauce that delivers saltiness and depth of flavor. (Note that the only salt in this recipe comes from the shrimp paste, so vary the overall saltiness of the finished product by varying the amount of shrimp paste.) 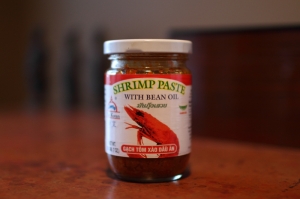 The eggplant makes a fresh and creamy background behind the lively chiles. This is what everything looks like before getting started: 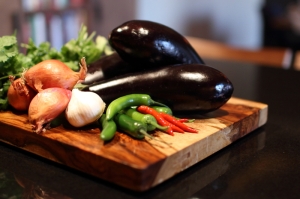 The assembled ingredients, before doing any chopping

Start by mincing shallots. By the way, for this dish, “mincing” means cutting as small as possible without going crazy. Some Western cooks would recommend using a food processor instead of doing all of this mincing, while some Burmese would use a mortar and pestle to grind everything into a paste. Both of those approaches are perfectly fine. Personally however, I just use a quick sharp knife.

Chop up some ginger and garlic so that it’s about the same size as the shallots:

I made this dish with two types of chiles: red pickled Thai chiles and fresh green Serrano peppers. The pickled chiles add some astringency, while the fresh chiles add some, well, … freshness.

Both types of chiles do add lots of heat, of course, so this is something you will want to individualize. I used equal amounts of fresh and pickled peppers. Note that the pieces are the same size as the shallots and garlic. 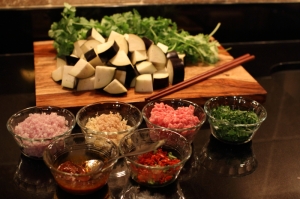 In the background are eggplant and cilantro. In the bowls in the foreground, clockwise from upper left, are shallots, garlic and ginger, ground pork, cilantro, red and green chiles, and shrimp paste.

For the actual cooking, start by frying the aromatics in your wok. This is the part that gets the whole household salivating because it smells so excellent.

Shallots., garlic, ginger, and peppers frying in the wok

Then add water, shrimp paste, and turmeric. Stir to make a sauce. 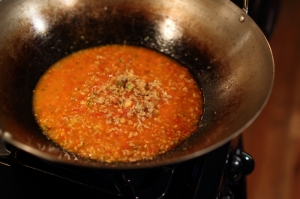 It becomes a sauce

Finally, add the eggplant and cover to steam. If you don’t have a cover for your wok, this is certainly the time to get one. Wok covers are lightweight, inexpensive, and ubiquitous in stores that sell Asian cookware.

After steaming everything long enough so that the eggplant is starting to lose its shape, you’re done. Serve with rice and garnish with cilantro.

Variations: Make this dish vegan by omitting the pork and the shrimp paste; substitute 1 Tbsp soy sauce (or to taste). Use green Thai eggplants instead of purple “Asian” eggplants. Garnish with mint instead of (or in addition to) the cilantro.