Long beans (长豆角, zhǎng dòujiǎo), also called yard-long beans or asparagus beans, are a staple in southern China. Thankfully, their popularity is growing worldwide as well. The beans tend to be a bit thinner and softer than the traditional Western green bean, with a somewhat more intense “bean” flavor. Some say that their taste is reminiscent of asparagus, hence one of their their alternate names. This recipe comes to me via a friend who lives in Chongqing, a southern city in that spicy region between Sichuan and Hunan. Typical of the region, the dish is spicy, warming, and hearty.

This is also another “simple” recipe by TastyAsia standards, meaning that it can be completely finished in the time it takes you to cook the rice. Start with long beans, which are obviously quite long in their natural state: 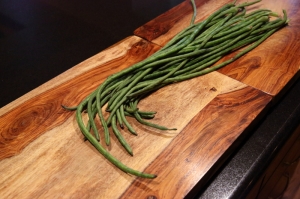 Cut the beans into bite-sized lengths before cooking.

The other vegetable in this dish is wood ear mushrooms (木耳, mùěr) which need to be in slivers that are about as long as the beans. Wood ears usually come dried, so you can slice them after softening in water. However, the dried mushrooms also come pre-sliced, which is much more convenient:

Okay, with that somewhat lengthy introduction out of the way, the recipe itself goes quite quickly.