If you’re a Western cook, you’ve probably been amazed at typical Chinese fish preparations in which the whole animal lies on a plate under a sauce. How do you cook it? How do you eat it? Well, the goal of this post is to demystify the process so you can do this kind of thing with confidence in your own home.

The hardest part, if you’re new to Chinese cooking, is getting up close and personal with your fish; everything else is familiar and flows pretty smoothly.

Start with the basics, including some minced ginger and some finely chopped fresh red chile peppers:

You’ll want to mix those fresh spices with some spicy bean paste and Sichuan peppercorns. All of the spices go into the wok after the fish gets a preliminary fry. And speaking of the fish, use one like this: 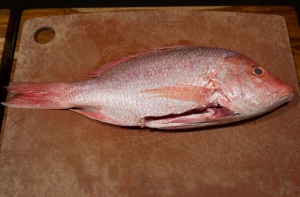 FIsh! A fish of about 1.5 lbs will feed two to four people, depending on how many other dishes you serve.

You’re looking at a 1.5 lb red snapper above, but any fish of similar size will do. Snapper is great because it’s fairly round instead of being long and skinny like a trout. That isn’t of much significance except that it means the fish will fit more easily on a standard plate. But really, any white fish of similar size would be fine.

You’ll want to get a fish with clear eyes and a fresh smell. I’d ask your salesperson to clean it and remove the scales for you, although this is simple enough to do at home. (To clean a fish, run a knife through the belly from behind the head to the base of the tail, then open it and remove everything inside. To scale a fish, scrape from the tail towards the head with a fish scaler.) Next, cut some slices through the meat so that the sauce can penetrate well:

The fish, scored a few times vertically, down to the bone

We’re going to braise the fish in this recipe, but in dishes that call for steaming, Chinese cooks will often stuff those slits with slices of ginger, onions, or other herbs.

Put some oil in your wok and fry the fish briefly on each side. The heat should only be medium so that the skin doesn’t stick to the wok and slide off the fish. You should turn the wok about, swirling the oil around, so that the whole surface of the fish gets lightly fried. 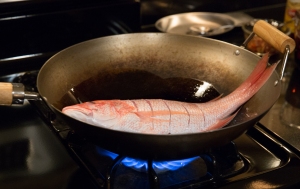 The fish sitting in the wok, frying briefly

Another view of the same

When the fish is just beginning to turn golden brown in spots, turn off the heat and remove the fish to a plate or board. Then pour off the oil until only a little remains to coat the wok. Add the spices and bean paste and stir fry. 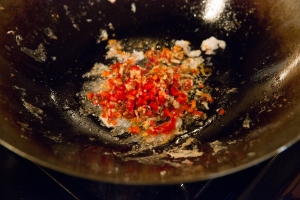 This is the part where it really starts to become fragrant

Then add the liquid, turn up the heat, and bring it to a boil. 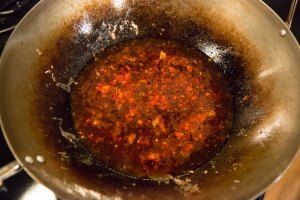 The sauce, heating up and getting ready for the fish

Slide the fish gently into the wok and cook for about five minutes or until done. The fish will be getting a bit fragile at this point, so don’t turn it. Instead, ladle the boiling sauce over the top. 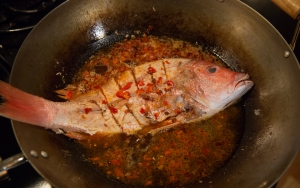 The fish, back now in the sauce, cooking for another five minutes or so

Remove the fish once again, this time to your serving dish. Boil the sauce for another five minutes until reduced and thickened. Stir in some scallions and sesame oil at the last minute and you’re done.

To eat, simply press your chopsticks into the fish and drag the flesh away, moving away from the spine and parallel to the bones as they run to the outer edges. This will keep you from getting a mouthfuls of bones.

Once everyone has finished eating the meat on the top side, you should be able to lift the entire spine and bones up off the bottom of the fish, which will remain on your serving dish in the rich and tasty sauce. Don’t neglect the tasty meat in and around the head of the fish.

VARIATIONS: The easiest variation is to simply try this recipe with different types of fish. Also, adding a small splash (1 tsp) of white rice vinegar at the end makes for a slightly more complex flavor. The character of the sauce can be completely changed by omitting the Sichuan peppercorns and spicy bean paste, and adding a handful of scallions (white parts only) at the beginning of the boil.

The essential Chinese pantry is here.